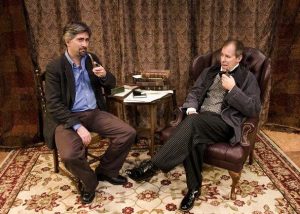 In between my writing gigs, I have also racked up an extensive amount of experience as a PR professional, in particular for theatre and arts groups. In 2002 and 2003 I was the PR Manager for the Seattle Fringe Festival, and from 2008-2010 I was the PR Manager for Seattle’s 5th Avenue Theatre, the largest live theatre venue in the Puget Sound. During my tenure at The 5th, the Theatre’s media coverage, in local and national print, radio and video, literally doubled. I’ve also worked as the PR Manager for UMO Ensemble and for Seattle’s Steamcon, the nation’s oldest Steampunk Convention, and am currently the PR Guy for Seattle’s Cafe Nordo as well as Theater Schmeater. If you’re interested in having me work on PR for your project or business, particularly if that business has a connection to the arts, contact me with details.