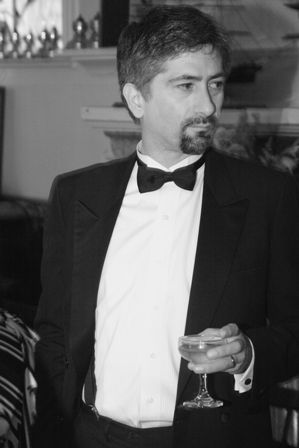 I grew up in Alaska, in the town of Sitka, which had approximately 21 miles of road and some spectacular scenery. After high school I attended the University of Kent in Canterbury, England, as an undergraduate, the University of York as a graduate, and after a brief hiatus the Central School of Speech and Drama on their directing course.

I came to Seattle and within six months I was writing theatre criticism for the Seattle Weekly, where I was soon promoted from freelancer to full-time theatre critic. I worked at the Weekly for six years, while continuing to write and direct theatre at the rate of one or two shows a year. I also became the President of the Washington Chapter of the Northwest Playwright’s Guild, as well as running a regular playwright’s group.

I eventually quit the job at the Weekly, gratified to have come away with some great memories, a couple of regional journalism awards, and some good friends.

From late 2003 to early 2005 I was the artistic director of a small but beloved fringe company, Theatre Babylon, where we managed to produce a year and a half of great plays before losing our venue the Union Garage to an impressive mass of bureaucratic red tape.

From 2008 to 2010 I was the PR Manager for Seattle’s 5th Avenue Theatre, a gorgeous historic building that produced a full season of fully-staged musicals. It was a fun job–though even after two years I still prefer theatre where no one spontaneously bursts into song or leaps into a choreographed dance number.

Since then I’ve focused more of my writing on fiction while continuing to try and keep my various theatre projects spinning. There’s a novel, and there are short stories, and there are even screenplays these days, as I begin a flirtation with the strange new worlds of independent films and web series. (Here’s a link to the pilot of Norm Owensen, Medieval Mercenary, which I co-wrote and co-directed in summer 2013.) Sometimes I wish the journey to making my living through my art was a little more clear–but then I think of all the wonderful side paths I’ve taken, and I think I’m doing just fine.